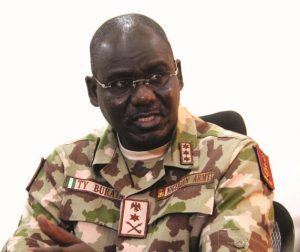 Nigerian Army said it is prepared to end the banditry in the North-Western part of the country and restore peace in the troubled states of the parts.

The resolve came as the force said it has made a significant achievement in the battle against bandits, cattle rustler, and kidnappers in the northwest zone of the country.

According to the force, troops have degraded the operation of bandits in Zamfara State which remains the most volatile area and the epicenter of armed banditry in the entire North-western States.

The Army said it achieved this through series of raids on bandits’ hideout, fighting patrols, and clearance operations which were conducted to contain the threat of the bandits.

It was learned that several bandits were neutralized and captured with lots of ammunition, Magazines, firearms, and locally fabricated weapons confiscated.

Also, animal rustling which was prevalent in the area had been reduced to the barest minimum as a result of the activities of OPERATION HADRI DAJI, with several animals recovered and returned to their owners through the State Committee on the Recovery of Rustled Animals.

The Army Headquarters said recently that the Chief of Army Staff (COAS), Lieutenant General Tukur Buratai, has concluded arrangements to relocate to the North-West part of the county to join troops on the ground in curbing the activities of bandits, kidnappers and other criminals in the area.

General Buratai expressed worry over the spate of attacks in the zone, saying he would soon be there to end what he described as “the madness of the bandits” and put them in proper check.

The relocation of General Buratai to the Northwest according to the experts is a welcome idea, but the Army must do more to show that it is in control of the situation by assuring the citizens that they can sleep with their two eyes closed.

Six states in the North-Western part of the country have been at the mercy of criminals as bandits have continued to harass residents of the affected area which include Zamfara, Kaduna, Niger, Sokoto, Kebbi and Katsina states.

Reports indicated that at least 70 persons were killed within the last two weeks in separate attacks by bandits across a number of communities in the Katsina.

To shore up the confidence of the people, experts say, is what the decision of the Army Chief to relocate to that zone will do, especially as it seems that the security of the area has collapsed completely

According to military experts, the presumed collapse of security is not an indication that the commanders of troops in that area were not doing much to curb the menace, but the citizens must join hands with the military to defeat the insurgents.

The presence of General Buratai, they said, will add impetus to the war against criminality in the North West and boost the morale of the fighting force.

Indeed, the troops have continued to decimate the bandits in numbers, especially with the continued bombardment of hideouts of the bandits who intermittently come out of their hideout to either kidnap for ransom or rustle cows from unsuspecting citizens.

A security expert said the criminals in Zamfara were able to succeed because the state is mostly surrounded by forests, from where bandits launch their attacks on outlying towns, highways, and villages.

The Rugu, Kamara, Kunduma, and Sububu forests according to the experts identified Abubakar Usman, have become major hideouts for criminals, who had capitalized on the fragile state system inflict harm to defenseless rural communities in the state.

The military recently said that the bandit will no longer have the needed oxygen to carry out its nefarious activities, especially as it has reawakened its operation in that northwestern part of the country.

Between January and April 2019 a number of operations by the Nigerian Army, such as OPERATION HARBIN KUNAMA, OPERATION DIRAN MIKIYA, and OPERATION PUFF ADDER, were launched in the bid to tackle banditry in the Northwest.

The military said they are not relenting in their resolve to rid these states in the northwest, of bandits as they will no longer be allowed the bandits the space to operate.

The Defence Headquarters said that in the last one week, forces on counter-insurgency operations in the northeast killed 45 terrorists and bandits and recovered several arms and ammunitions.

According to Major General Eneche, the Director Defence Media Operation, the soldiers rescued about 40 hostages held by the terrorists and also made some arrests.

The arrest of the suspect is said to have brought relative peace to the surrounding communities.

The Director Defence Media operation said that in the North-West, troops of the Armed Forces of Nigeria have continued to build on recent successes against armed bandits operating in the region following intensive ground and air assaults on their identified bases, with scores of bandits killed.

It was learnt that the Land and Air components of Operations HADARIN DAJI, KATSINA and ACCORD, carried out aggressive clearance operations at several identified bandits’ enclaves.

Most importantly was the attack on 3 camps operated by one “Adamu Aleiro” in a forest along the Katsina-Zamfara boundary area.

Scores of bandits were killed during that encounter, with several others injured. He said that in the process, troops also apprehended three suspected bandits, including one Ibrahim Isa clad in military camouflage while 6 kidnapped victims were rescued, amongst other recoveries.

The Air Component of Operation HADARIN DAJI had also destroyed an armed bandits’ logistics store and neutralized no fewer than 30 bandits in airstrikes conducted in the Doumborou Forest area of Zamfara State.

Gen. John Eneneche in a statement recently explained that the operation was executed based on credible Human Intelligence reports indicating that a thatched structure within the Forest was being used by the bandits to store their logistics items.

According to him, an Intelligence, Surveillance, and Reconnaissance (ISR) aircraft on patrol spotted some of the armed bandits on motorbikes and tracked them to the storehouse where they lodged some items.

He said: “The Air Component therefore dispatched an attack helicopter to engage the location, scoring accurate hits resulting in the destruction of the store, which was seen engulfed in flames.

“The attack helicopter subsequently trailed the armed bandits who fled the location and mopped them up in follow-on attacks, neutralizing no fewer than 30 of them as later confirmed by HUMINT sources.”

The Chief of the Air Staff (CAS), Air Marshal Sadique Abubakar commended the Air Component of Operation HADARIN DAJI for their professionalism and directs them to remain resolute in the conduct of air strikes whilst continuing to provide close air support for ongoing ground operations in order to eradicate all armed bandits; thus achieving the directives of the Chief of Defence Staff (CDS) General Gabriel Olonisakin of restoring normalcy in the North West.

The statement also said, the Armed Forces of Nigeria sincerely appreciates the continued support and cooperation of all well-meaning Nigerians, as we keep up the tempo of our operations to defeat all enemies of our Great Nation.

Ideaslane.com is the No1 youth and student development platform in Africa
©
MORE STORIES
INTERNSHIP OPPORTUNITIES